On Sunday was my little brother’s 12th birthday. It was all very exciting consisting of a sleepover, plenty junk food and of course – presents. My parents bought him a nifty little digital camera which is a pretty cool present for a 12 year old, right? No. He was not impressed. “I didn’t want a camera,” he told me. What did he want? An X Box.

I clearly recall wanting a laptop for my 12th birthday, but back then most people were still using desktops and even then we were lucky to have those. With kids being accustomed to constant digital advancement, it’s hardly surprising that they want the latest and greatest technological toys. In a world where everything digital advances at such a rate, it is no surprise that this is what we all are becoming accustomed to, and expecting ourselves. 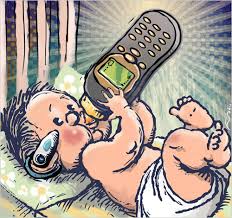 A generation brought up on technology

When Apple announces the new line of Macbook Pros at the WWDC (World Wide Developer’s Conference), consumers complain that it’s not a newer version of the iPad or iPhone. They expected a bigger announcement than the mere updates to iOS 6 or updates of the Apple App Store.

Is the world we live in constantly waiting with baited breath for newer, better, faster versions of just about everything? If this is the case, can I really blame my brother for wanting a digital technology “better” than what he already owned? After all, don’t we all seem to want these same things, even if it doesn’t quite materialize itself as an X Box.

It has been too long since I last posted something substantial (read: at all) on this blog. After finally getting our internet set up in our flat, I officially have no more excuses left to make use of.

And with that, let the new reign of blogging begin.

(Ironic much, to be posting this from my Blackberry?)